Accepting the directive of the European Commission, that encourages the collaboration between research projects funded in the same call, cooperation between PROMERC and IPATCH projects has been promoted.

IPATCH (Intelligent Threat Detection and Avoidance using Countermeasure Heuristics) aims to analyze current non-military measures against maritime piracy, in order to produce a handbook to facilitate the use as well as a further development of measures to contrast the piracy phenomenon, and to develop an automated tool to support decisions on board able to provide the operator a real-time assessment of the risk of piracy attack.

Engineering Ingegneria Informatica (EII) team, involved in the design of PROMERC database and Transcrime team (Joint Research Centre on Transnational Crime of the Università Cattolica del Sacro Cuore of Milan) in charge for the IPATCH data compilation, have explored any possible solutions to develop a joint standard data schema to be used as core for the development of both PROMERC and IPATCH databases.
Although both projects are in response to the same call their goals are rather different. In fact the set of information managed by each project is not the same, even if some common data sources are used. This means that the two projects result in very different databases and the production of a joint database is not felt to be viable.
Exploiting the flexibility of the PROMERC data schema, in the middle of 2014 PROMERC consortium has shared its relational data schema with IPATCH database team that has taken the PROMERC schema as input to its data modelling exercise.

On 27th May 2015 in La Spezia, hosted by NATO Centre for Maritime Research and Experimentation (CMRE), was held the PROMERC/IPATCH joint workshop during which it was made a comparison between the PROMERC Counter Piracy Measure Database (CPMD) and IPATCH Incident data models.
The workshop has highlighted that PROMERC looks mainly at the “macro” scenario/context, focussing on the strategic aspects (mainly during voyage planning phase); IPATCH looks mainly at the “micro” scenarios/context, focussing on operational aspects (mainly during attack phase).

In the data collection and analysis exercises, PROMERC focussed on data relating to countermeasures and IPATCH focussed on piracy incident report data; the differences in the schemas reflect this (see previous figures).
PROMERC database is based on the concept of Counter Measure Product (CMP) and takes into account the relationships between the CMPs and PEESLE (Political, Ethical, Economic, Social, Legal and Environmental) factors. Moreover, information and data on costs and utility related to each CMP are managed and elaborated.
IPATCH data model, instead, is based on the information reported on piracy incident and on the data related to attack details, incident place and vessels involved.
Anyway, the common core of the two data models is already conceptually aligned (although there may be some terminology differences) and each project provides extensions to suit its own purposes.

The PROMERC and IPATCH consortiums agree that the two projects will provide a joint recommendation and guidelines on how to fully harmonise the two data models with the aim of contributing to a standardised interchange format for populating the corresponding database in the future.

During the joint workshop a session has been dedicated also to the comparison between PROMERC Counter Measure (CM) manual and IPATCH manual.

PROMERC Counter Measure Manual is a catalog of non-lethal counter measures that contains all available counter measures categorized based on studies made by domain expert partners.
The Manual aim is to help in the selection and use of appropriate counter piracy measures in a layered holistic defense, in order to assure the opportune level of security of merchant fleets in case of pirate attack.
It has been developed as handbook in pdf format, as well as through an Interactive Web Application (IWA), in order to take into account the complex multifaceted nature of piracy using deductive reasoning as well as to answer with various numbers of available options in order to mitigate the risk of piracy.
A user guide for the IWA in PDF format, also accessible directly from the IWA application has been released. It provides help and some use cases to become familiar with the application. 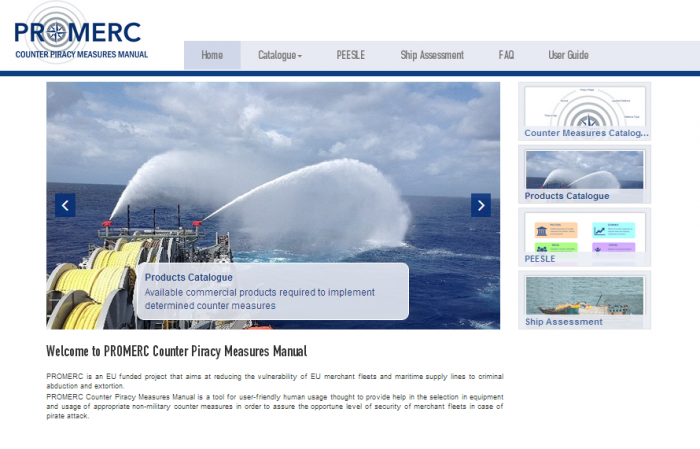 On the other side, the IPATCH Manual on Countermeasures provides practical guidelines for the implementation of a list of selected non-lethal countermeasures that can be potentially used at each stage of the pirate attack or used as deterrents or as risk reduction measures when crossing piracy areas.

As with the data models, the use cases for the manuals are different but the outputs are complementary. Whilst the tools and interfaces are separated, there is the potential to use a pooled database of information about the countermeasures (as this should be the same).
Both projects will face the issue of what to do with the manual at the end of the project. Challenges include how to keep the information up to date and how to control access to the information (security). One option is to hand over the databases to a suitable organisation who can fulfil these roles.

PROMERC and IPATCH consortium have agreed that, if this option is pursued by both projects, it would make sense to provide the databases as a complementary pair.