Largely as a consequence of failed states, piracy has re-emerged as a global security threat, most recently in the waters off the Horn of Africa, but also in West Africa, the waters off India, the South China Sea and the Strait of Malacca, and the Caribbean. Pirates tend to operate in regions with large coastal areas, high levels of commercial activity, small national naval forces, and weak regional security co-operation mechanisms1. According to International Maritime Bureau statistics worldwide rates of piracy began to increase in the early 1990s, peaking at roughly 350 to 450 reported attacks per year during the period 2000-2004, then declining by almost half by 2005. In 2007, almost half of the world’s reported pirate attacks took place in African waters, mainly near Nigeria and Somalia. There have been 70 attacks in Somali waters reported to the International Maritime Bureau in the first 9 months of 2012 representing over one third of attacks worldwide.

The long term solution to piracy requires building stable states and tackling poverty. This has been recognised by the international community being active in the support and development of these countries and regions. This is a complex process with many political issues and implications that will take many years.In the short term, adequate, cost effective solutions are needed to protect seafarers and merchant shipping and to secure Europe’s maritime supply lines. 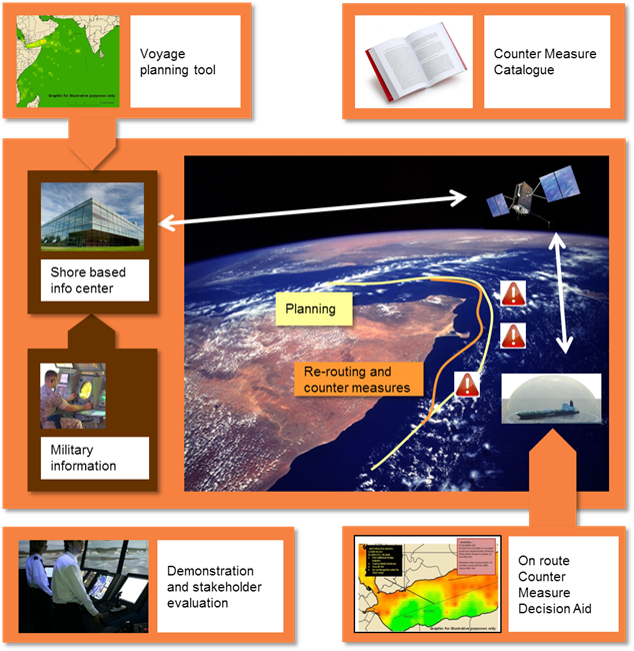 PROMERC will provide a layered approach to planning, routeing & threat reduction. The concept is to provide interlocking tools which will enable informed decisions and an improved choice of counter measures in order to avoid, deter and defeat piracy. The tools will support a mix of active and passive measures whichare appropriate to the situation and the threat.

Key features of the concept include the fact that the aforementioned tools are Web based or semi autonomous,a risk based approach is taken applying rigorous analysis, customer centric tailored data services will be made available and a highly automated expert system is at the core of the tools.

Benefits of the concept are multiple: risk of piracy is reduced, cost of re-routeing is minimised, satellite vessel tracking and continuous updates are provided to the Company Security Officer (CSO) and Master en route, piracy risk is quantified to aid decision making, planning and routeing interlock with hardware options to provide layered defence and risk mitigation.